If you are traveling to Gaya then do not miss out to visit the famous Barabar Caves, origin of which dates back to nearly 3rd century BC. Known to be the oldest surviving rock-cut caves in India, Barabar Caves are known for their architectural beauty and are located at a distance of 24 km from Gaya. Constructed under the patronage of Mauryan Emperor Ashoka and his son Dasaratha these caves are glaring example of rock cut architecture in India and contain Ashokan inscriptions. The caves were used by ascetics from the Ajivika sect founded by Makkhali Gosala. 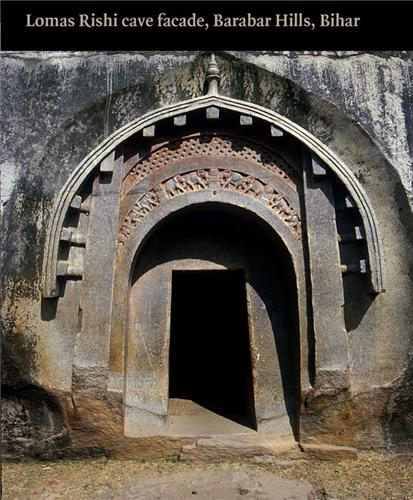 All the caves here have two chambers carved out of granite. They have enormous arches and a unique echo effect is noticed here due to the polished interiors. The first chamber is reserved for the masses to assemble for worshiping shrines known as stupas that were placed in the inner chamber. However, the inner chambers are now vacant. The Barabar caves have been carved very intricately and are so sharp that these provide an illusion of laser cutting. Wooden crafting seems visible from the inside of the caves and there are several Jataka stories portrayed on the walls of the caves that help to understand the growth of Buddhism.

Out of the four prominent caves at Barabar caves that is Lomas Rishi, Sudama, Karan Chaupar and Vishwa Zopri, the Lomas Rishi caves are the most fascinating caves as they look like they have been cut out of a huge mound of granite and resembles wooden huts that Buddhist monks used to live in. A row of elephants lead towards the stupas in this cave. These caves are meant for ascetic spiritual Buddhist monks, those in search of isolation and seclusion, in their search for truth.

The Karan Chaupar is a single chambered structure with a vaulted roof with a small gate. The Sudama caves have arches that are bow-like in shape and the halls have been provided with a circular shape which have been very well polished from the inside and are a major tourist attraction. The circular chamber also has a mandap. The rock-cut architecture found in these caves is very beautiful and has been found in the Ajanta caves and Karla caves and some others in South Asia. The Vishwa Zopri cave has two rooms of rectangle shape that can be reached by the rock cut stairs.The Barabar caves have been so constructed that they are closed from three sides and open from one.


Near by Places of Attractions

After a visit to the Caves, you can climb up the nearby hill to Siddheshwar Peak. The peak is famous for small Shiva Temple. You can also find statue of Maa Durga on the top of the peak. Aerial view of the Barabar caves from the peak is certainly exciting and brings out adventurous feel in you.


How to Reach Barabar Caves ?

The Barabar Caves are about 25Km north-east of Gaya and can be reached via private taxis or bus from Gaya. It is hardly 30m minutes from Gaya. It takes a day to explore the caves in detail. No doubt these beautiful specimen of rock cut architecture will ever continue to wonder about the skill attained by our ancestors centuries back.


Explore more about History of Gaya