One of the major attractions in Gaya is the famous Bodhi tree under which Lord Buddha is assumed to have attained enlightened. It is a heavily protected, worshiped and revered site in Gaya. There is a stone platform under the tree in Bodh Gaya on which it is believed that Lord Buddha sat in meditation gazing eastwards.The Bodhi tree is distinct due to its heart-shaped leaves, the kind that are on fig trees. Most Buddhist monasteries plant Bodhi trees in close proximity due to the spiritual bent to them. 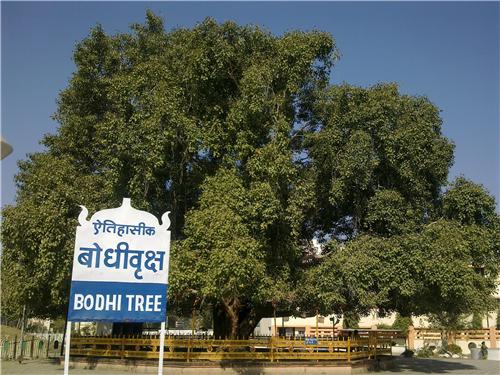 In Bodh Gaya, the Bodhi tree is located to the south of the Mahabodhi Temple and it is said that the existing tree is of fifth generation of the original Bodhi Tree. The tree is estimated to be around 115 years old and is about 80 ft in height. Early pilgrims would carry leaves and seeds of the sacred tree to their homes and therefore, sacred Bodhi trees around India are probably descendants of the original Bodhi tree.

The myth behind the uprooting of the original Bodhi tree is that the wife of Emperor Ashoka destroyed the actual tree as she was jealous that the Emperor, her husband, was spending too much time there. Luckily for the Emperor, his daughter Sanghamitra had carried a branch of the original tree to Anuradhapur and planted it there which can still be seen standing even today. A sapling was brought from Anuradhapur and planted again in Bodh Gaya. The Queen, the second time attempted to fell the tree as the Emperor began worship subsequently too. However, Emperor Ashoka piled up sand around the stump, offered milk to the roots of the tree and miraculously, the tree was revived and extended upto a height of 37m. For the future protection of the tree a three metre high stone wall was built.

The other prevalent Bodhi trees are Anandabodhi in Sravasti and Anuradhapura in Sri Lanka, both significant in the history of Buddhism and believed to have been off-shoots of the original Bodhi tree. The tree at Bodh Gaya is a favorite place for pilgrims to meditate and remember Lord Buddha. It is also customary to hang prayer flags or leave offerings at the site.


Explore more about History of Gaya