Gaya, a predominantly religious town situated 100 kilometers South of Patna is a place revered by both Hindu and the Buddhist religions. Gaya is surrounded by several hills including Mangala-Gauri, Ram-Shila, Shringa-Sthan and Brahmayoni by three sides and the river Phalgu flowing on the fourth side. It is located at longitude of 84.40° to 85.50° towards East and the latitude is 24.50° - 25.100° towards North.

Gaya being surrounded by hills from three sides and one side by a river makes the region experience seasonal temperature. In Summer which begins in May and continues till July temperatures ranges from 20.5°C to 44.5°C. People of the region can be seen wearing light colored cotton clothes to get some relief from the scotching heat. Gaya receives about 214 cms of rainfall annually between July to October and it is advisable to avoid traveling to Gaya and nearby regions during that time. The best season to visit is around Oct-Feb. During the winters, the temperatures range from -04°C to 28°C. Therefore during the winter months of October to March proper woolen clothing is advisable.

One of the 5 districts of the Magadh division and one of the 38 districts in Bihar, Gaya is spread in an area of 4,976 sq.kms with 24 blocks. Phalgu is the main river that flows through Gaya. Initially, Gaya was a part of the districts of Bihar and Ramgarh till 1864 and was given the status of independent district in 1865. 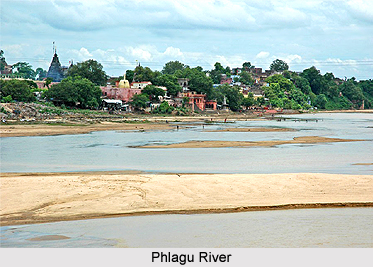 Then, during May 1981 the Bihar government created the Magadh Division with the districts of Gaya, Aurangabad, Nawada and Jehanabad. The river Phalgu flows through the Gaya and is considered as a sacred river for Hindus. Below Bodh Gaya, the junction of Lilajan and Mohana, two large streams form the Phalgu. During the monsoons, the Phalgu faces high floods.

The main agriculture crops are paddy, wheat, potato and lentils. In 1976 Gaya district became home to the Gautam Buddha Wildlife Sanctuary, which has an area of 260 km2 (100.4 sq.mi).The prominent mineral reserve of Gaya is Stone (Boulders). Other minor minerals include sand which is found in the river beds and is collected and transported to the district and to major construction sites.