Mahabodhi Temple is not just an important tourist destination but is indeed a pride of Gaya. In fact it would not be wrong to even claim that this gigantic and huge temple complex is actually pride of entire nation of India. After all, it was here that some 2500 years back Siddhartha had achieved enlightenment and Buddhism religion was eventually born, making this place the most sacred place for Buddhist devotees across the world. And not surprisingly at all, even today every year this sacred temple is visited by millions of Buddhist pilgrimages including holy Dalai Lama. 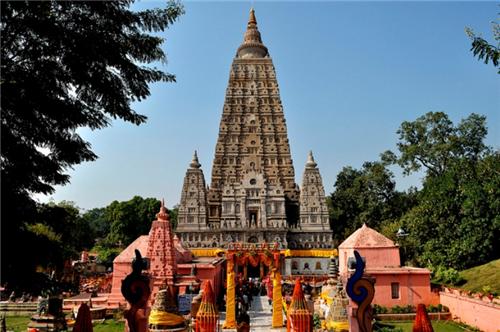 And now some important information about rich history and architecture of this temple. Construction of this temple was initiated by King Ashoka, one of the greatest kings in the history of India. A born Hindu, king Ashoka converted to Buddhism after his victory in infamous Kalinga war. He began construction of this temple in 3rd century BC by setting-up the Vajrasana (Polished Diamond Throne) underneath the same Bodhi tree where Siddhartha had achieved enlightenment. However, unfortunately construction of the temple could not be completed during king Ashoka’s reign. In fact construction of the temple for many centuries after king Ashoka’s death and was eventually completed during period of Gupta reign in 7th century A.D. In subsequent centuries and during dynasties that followed after Gupta reign this temple was subjected to great negligence and apathy. However, small restoration and renovation work did take place during medieval period, but they weren’t sufficient enough to restore its glorious past.

It was only in year 1883 that major renovation work was done under supervision of famous British archeologists Sir A. Cunningham. This was followed by even bigger renovation work conducted by Indian government on the eve of 2500th Buddha Jayanti celebrations in 1956. Subsequently, many more renovation work followed during later decades. And today – after undergoing so many renovations – this temple stands splendidly and magnificently. In fact today Mahabodhi Temple is widely considered as one of the most beautiful temples of modern day India. Mahabodhi Temple complex is immensely huge and hence apart from main temple building there is so much to this temple complex. Below are details of some of the most important places within Mahabodhi Temple Complex. 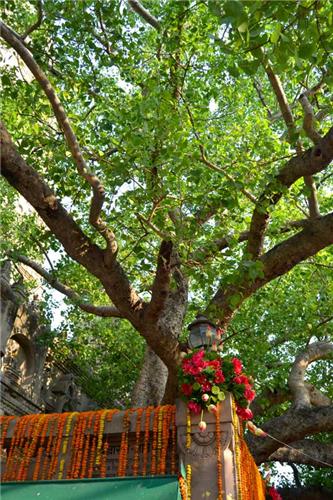 The famous Bodhi tree is the one under which Siddhartha had achieved enlightenment and was from then known as Buddha. The present tree is probably the fifth succession of the original tree which is believed to have been destroyed by natural calamities.

Located to north east of Mahabodhi Temple, this place is where Buddha is believed to have spent entire second week (after achieving nirvana) in standing posture.

Located in north-west of the Mahabodhi Temple, Buddha is believed to practiced intense meditation during forth week after achieving nirvana.

This is immensely beautiful park that was developed just few years back. It is completely dedicated to meditation – as is clear by name itself. There are many specially designed huts and congregation place throughout the park where one can practice peaceful meditation.


How to Reach Mahabodhi temple ?

Mahabodhi temple is located in small town of Bodh Gaya, located just 15 kms from main city of Gaya. The convenient way to reach Bodh Gaya from any part of India is via rail and flight. The nearest railway station is Gaya station, which is an important junction and is directly connected to almost all the important cities of India. From Gaya station you can hire rental taxi or even auto rickshaw for Mahabodhi temple. Besides, Bihar State Tourist Development Coporation runs deluxe bus service from Gaya to Bodh Gaya all throughout the year. And in case if you’re planning to travel via flight, then it is even better. This is because Bodh Gaya does have a small airport, known as Gaya airport. It is located just 14 kms away from Mahabodhi Temple. As for connectivity is concerned, then it is connected to almost all the important cities of India via direct and indirect flights.